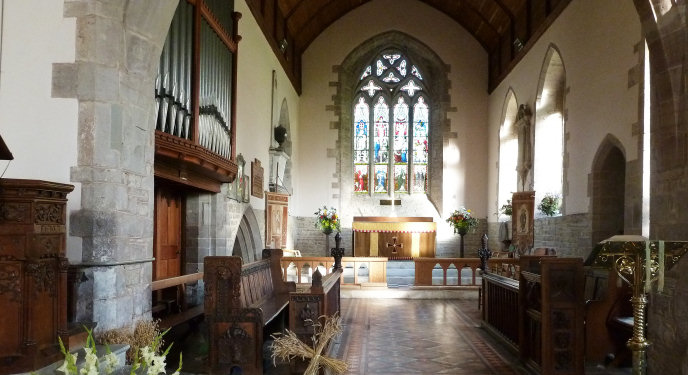 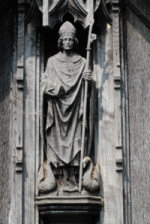 An earlier, wooden church stood on this site, dedicated to the much loved Anglo Saxon, St Cuthbert, who loved animals and wild countryside. He was famous for performing cures and the Lindisfarne Gospels were dedicated to him.

The present stone building was begun by the Lord of the Manor, Roger de Halberdine, soon after 1305, unfortunately just before a mini ice age. Nevertheless, the villagers continued building their church for more than 40 years despite such great poverty that they were frequently excused from paying tax. They used stone from quarries, which are still visible in the parish and chancel roof beams from local oaks. Dendrochronological dating shows those trees to have been felled in the winter of 1329-30 and put up straight away. The sandstone windows were bought from a more distant Shropshire quarry and would have been a great expense for the Lord of the Manor.

Earlier glass and decorations were destroyed in the Reformation but the archway for Roger’s tomb remains and 14th Century wooden chest, which held his robes as an Acolite, is still in use in the chancel. The medieval bells, which were originally housed in a turret on the roof, are frequently rung today. 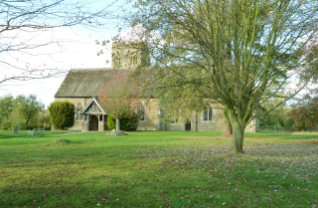 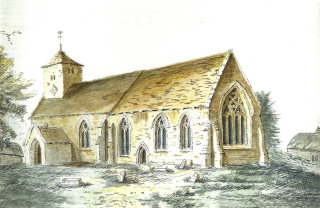 Once completed, probably with help from the Earl of Arundel after the cost had bankrupted Roger de Halberdine, the church was carefully maintained through the centuries by local builders under the direction of the Church Wardens. A fire in the early fifteenth century, caused the side chapel, (the modern Vestry”) to be re-roofed in 1415 but no major alterations were done to the medieval structure until, after 650 years, the Victorians added a stone tower to house the bells. 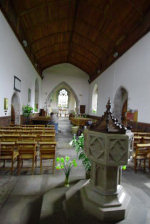 The organ was installed in 1895 and the earlier pews were taken out and used as panelling round the walls, so Caro’s interior leaving the whole nave as a space to be adapted freely for a variety Portrait of uses alongside.

In medieval times the Rector had regularly paid to the Manorial Court licensing fees for brewing the “Church Ales”, which were parties held in the church several times a year. In 1636, when the Rector, Samuel Barkeley, tried to stop the tradition of the Easter Feast of bread, cheese and ale in the church, there was so much indignation among the villagers that they even wrote to Archbishop Laud to complain and he intervened on their behalf! Luckily, the present Archbishop also supports these activities in churches and the Friends are determined to keep up the tradition.

A fuller account of the history is available in “Clungunford, 950 Years of a Rural Community” by Alick and Fiona Barratt Published in 2002. It is now out of print but there is a copy available to be looked at in the church.