In 1996 a group of women formed the Kneelers Project. Mary Terry of Abcott agreed to lead the project. The group agreed to use locally sourced materials and to raise money.

The kneelers are made of wool on canvas and each maker chose her own design. Many of the kneelers show local scenes or aspects of Clungunford village life. These include local landmarks such as Abcott Manor, farm life with sheep and collies, and local history such as the Anglo Saxon lord Gunward – who gives Clungunford its name which is still abbreviated locally to Gunnas - crossing the Clun.

The more experienced needlewomen helped those who had enthusiasm but little or no experience and the results can now be seen in the 60n beautiful kneelers which are in out church today.

In 2006 two of the group members began a new kneeler to complement the oak altar rail. This is now complete and was first used at the Easter service in 2011. 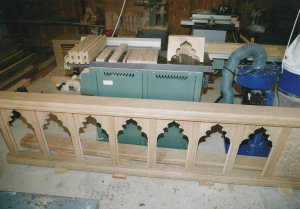 The solid oak altar rail was designed and made at Shelderton in Clungunford parish by Geoffrey Rollason, in memory of his late mother, Barbara Rollason.

The scale drawings for the design included a sketch of the leaves and acorns of the Shelderton oak, an enormous ancient tree which is a much-loved landmark beside the lane from Shelderton to Clungunford.

Geoffrey carved the two panels after tracing the branches onto the wood. The arches and uprights were mortised and tenoned into the top and bottom rails. All the joints were glued and no nails were used. 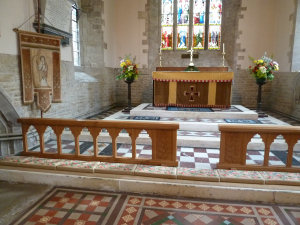 The mouldings on the top and bottom rails were done on a spindle moulder, using different cutters to make the different profiles on the edges.

All the oak is English, obtained from a local saw mill at nearby Ferney. The whole project took about three months to complete.